Minnesota’s population has increased by 2.5 million people (85 percent) since the middle of last century, but the rate of that growth has been unevenly spread geographically and over time. The following analysis provides a description of Minnesota’s population change since 1950, focusing on the amount of the change and where it has occurred. The following analysis is a simple numerical examination of where population in the state has grown and where it has not, not an in depth exploration of the many and varied reasons for these growth patterns. While some of the state’s population trends—such the more rapid increase in the metropolitan area relative to Greater  Minnesota—have long been known, the magnitude and changing nature of these trends over time is often not fully appreciated.

This analysis will be based on population information from the last seven decennial censuses (from 1950 to 2010) and annual population estimates from the Minnesota State Demographic Center and the U.S. Census Bureau for 2011 to 2016.* For purposes of this analysis, the 87 Minnesota counties will be grouped into three groups: (1) the seven-county metropolitan area (comprised of Anoka, Carver, Dakota, Hennepin, Ramsey, Scott, and Washington); (2) nine “collar” counties immediately adjacent to the seven metro counties (Chisago, Goodhue, Isanti, Le Sueur, McLeod, Rice, Sherburne, Sibley, and Wright); and (3) the 71 remaining counties, referred to here as “Greater Minnesota counties.”†

The growth in Minnesota’s population since 1950 has not been evenly distributed across the state.

Of the estimated 2.55 million increase in the state’s population from 1950 to 2016, 1.86 million—73 percent of total statewide growth over this 66-year span—occurred within the seven-county metropolitan area (henceforth referred to as the “metro area”). The remainder of the growth was somewhat evenly divided between the collar counties (0.32 million) and Greater Minnesota counties (0.37 million).

The following map shows the numerical increase in the county population from 1950 to 2016. 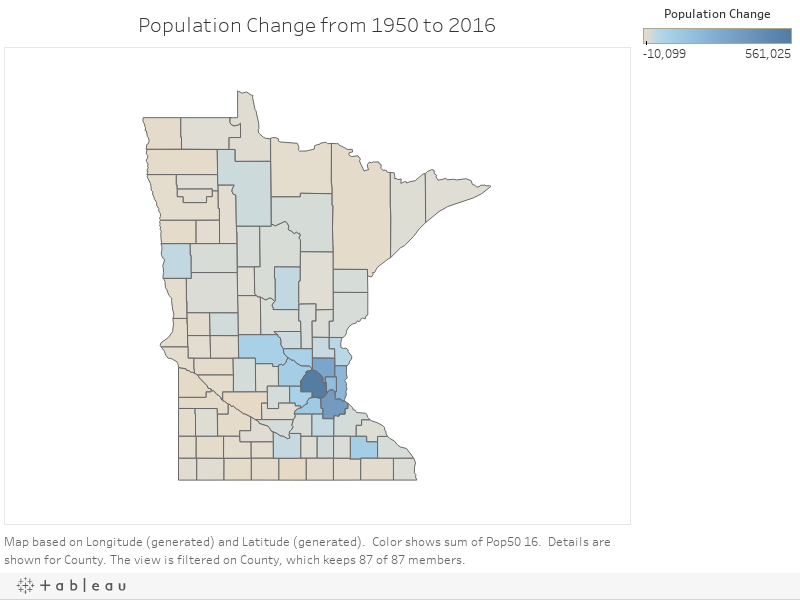 Average annual average population growth from 2010 to 2016 fell short of the statewide average in all but two of the collar counties (Sherburne and Wright), and actually declined in three (Le Sueur, McLeod, and Sibley). Population growth among all 71 Greater Minnesota counties was below the statewide average, except for Blue Earth, Clay, and Olmsted counties; population declined from 2010 to 2016 in 42 of these 71 counties.

The rate of growth in collar county population has subsided in recent years, while seven-county metro population growth continues unabated. Population growth in Greater Minnesota has lagged behind statewide and metro growth throughout the entire period since 1950. This trend is almost certainly due in part to the mechanization of the agricultural industry and concentration of farm land ownership, which has translated into a need for a smaller agricultural workforce.

The use of county-level data masks some interesting population trends that have occurred within Minnesota counties. Two of these trends will be explored in the next article in this series.